Skip to main content
The night sky from ESO's Paranal Observatory in Chile. The telescopes shown here, the VLT Auxiliary Telescopes, feed light into the Very Large Telescope Interferometer, the world's most advanced optical instrument. Combining to form one larger telescope, they are greater than the sum of their parts: they reveal details that would be visible with a telescope as large as the distance between them.
Credit: Y Beletsky (LCO)/ESO

Ancient ‘fossil’ galaxies offer insight into formation of the Universe

Dr Chiara Spiniello from Oxford’s Department of Physics is leading work to study 'fossilised' galaxies – galaxies frozen in time from when they were formed almost 10 billion years ago. Learning more about these 'ancient relics' will help to inform our understanding of the formation and evolution of our Universe.

In search of galactic gold

The project began in 2016 with the identification of some 1,000 galaxies – from more than 5 million – that had similar masses to the massive elliptical galaxies in the present Universe but that were 4-5 times smaller. It is these galaxies that have the greatest chance of containing galactic gold: so-called 'red nuggets'. Red nuggets are ultra-compact, massive red objects that are thought to have formed only a few billion years after the Big Bang as a result of a short-lived, intense and fast star formation episode. Ordinarily the red nuggets merge with other galaxies or gas falls into them and forms new stars; over an extended period of time, this process causes a dramatic growth in size and transforms the red nuggets into the massive elliptical galaxies we observe today in the Universe.

Relics of the ancient Universe

However, some red nuggets do not meet any other structure in their life and so continue on their isolated path in cosmic time without increasing their size or, importantly, without changing their stellar content. These lonely red nuggets are frozen in time and are known as the relics of the ancient Universe; studying them is akin to an archaeologist learning from dinosaur fossils and they have the potential to unlock our understanding of the very formation of structures within our universe. 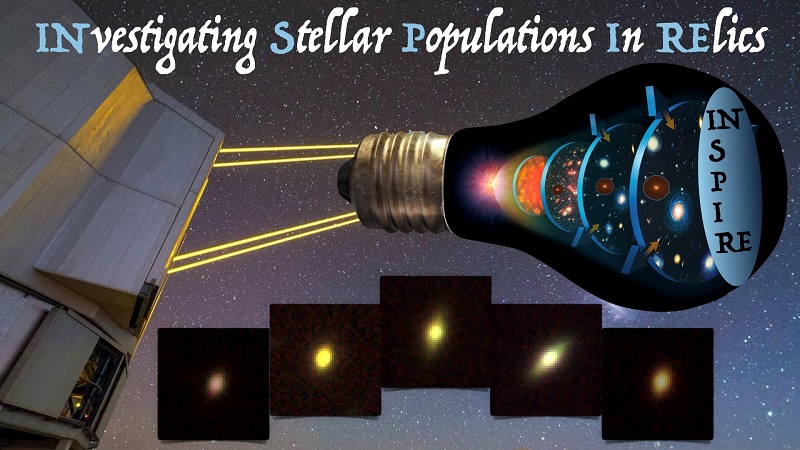 Dr Spiniello’s project, Investigating Stellar Population in Relics (INSPIRE), is working to find these rare objects and study their stars in great detail; INSPIRE is part of a broader project led by Dr C Tortora from INAF, Italy. Having already identified the ~1,000 galaxies as possible candidates, the group had to then confirm that these ultra-compact objects were indeed bona fide galaxies with masses of 100 or more time that of our sun. To do this, they mounted a multi-site, multi-telescope campaign and confirmed that around 100 were indeed as they hoped. Having calculated their stellar masses, sizes and differences, the group’s final challenge was to prove that the stars were almost as old as the Universe and that, after that initial quick star formation episode, they did nothing else but evolve passively and alone.

INSPIRE was awarded 154 hours of observations on the VLT telescope by the European Southern Observatory (ESO) to target 52 of these ultra-compact massive, confirmed galaxies and Dr Spiniello and her team have has the results on the first 19 galaxies that were observed until the end of 2020. Of these 19 galaxies, ten have proven to be of incredibly old stellar age and formed the totality of their stars within 2 billion years from the Big Bang.

'The discovery of ten new relics as shown in INSPIRE’s first data release, extends by a factor of three the number of known objects so far – only three in the local Universe,' comments Dr Spiniello. 'Moreover, it is the first time that relic galaxies are found at larger distances, up to 4 billion years from us – finding relics at different distances from us is a necessary step to study the evolution in cosmic time of this very peculiar class of objects. The discovery, and the INSPIRE project in general, will have a huge impact on our understanding of how structures in the Universe evolve.'