A new angle on skyrmions 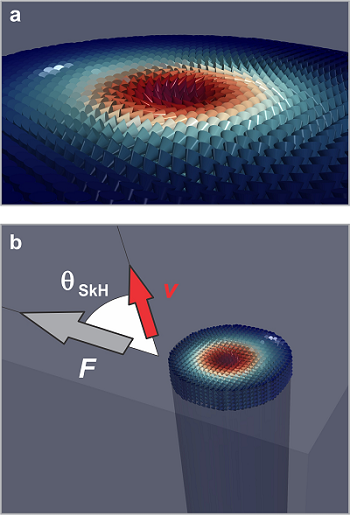 Magnetic skyrmions are recently discovered topological whirls of magnetization that under specific conditions form lattices in some chiral crystals. One of the most striking consequences of their topology is the inability of a skyrmion to travel in the same direction as the applied force. The angle between the force and the resultant direction of motion of a skyrmion is called the skyrmion Hall angle, and although it completely controls the dynamical properties of skyrmions in a material, measurements of it are limited and have proven to be challenging. A visualisation of a magnetic skyrmion is shown in panel (a), and the relationship between the force, induced velocity and the skyrmion Hall angle is indicated in panel (b).

Magnetic skyrmions are found only in materials with a Dzyaloshinskii-Moriya interaction (DMI), which can exist in magnets that lack a centre of inversion symmetry; these materials are known as chiral magnets. All else equal, those materials with a larger DMI tend to host magnetic structures that are more tightly twisted, meaning that skyrmions become more compact as the DMI increases.

Even in magnets that have a centre of symmetry, a small DMI can be generated by sandwiching a thin layer of the magnet between layers of different materials. In this setup, a spin in the magnetic layer sees a different chemical environment above and below it, breaking the inversion symmetry and allowing a small DMI to exist. Materials made in this way are called magnetic heterostructures, and they tend to host sparsely distributed skyrmions that are much larger than their counterparts found in chiral magnets.

Skyrmions appear to freeze into a hexagonal crystal in chiral magnets, and a crystal made of skyrmions will follow the same physics as crystals made of atoms. In particular, it was discovered in the 1920s that when crystals are subject to a shearing force, their response is governed by their defects and dislocations.

Researchers from the University of Oxford’s Department of Physics noticed that the properties of defects and dislocations in the hexagonal crystal formed by skyrmions would force the skyrmion crystal, when sheared, to reorient itself along the direction of the shear. They further calculated that the force applied to skyrmions by the non-uniform magnetic field around a wire would shear a skyrmion crystal along its direction of motion, so that the orientation of a skyrmion crystal, which can be measured in a diffraction experiment, provides a fingerprint of the direction in which the skyrmions are moving.

Scattering from a magnetic crystal

In a collaboration with Diamond Light Source, a resonant elastic x-ray scattering experiment was carried out on a thin lamella of the chiral magnet FeGe. The researchers found that, while the skyrmion crystal always nucleated in a random orientation under a uniform magnetic field, it also rotated to the same orientation when a non-uniform magnetic field was applied by passing a current through a wire suspended near the surface of the sample. This was used to carry out the first measurement of the skyrmion Hall angle on any chiral magnet, and it was found to be 〖55〗^∘ in FeGe. This remarkably large angle justifies previous theoretical predictions and opens the door to devices that can make use of this unusual behaviour.