Why two Higgs are better than one

The picture, right, is of the ‘Higgs potential’ which is a field, rather like an electric field but one that affects our entire Universe. Our Universe is represented by the blue ball and when our Universe was sitting at the apex at the centre of the real and imaginary axes of the potential field, all of the particles of the Universe were massless. Our Universe could sit there, on that apex, because it was in a high energy state at its first formation. But as the Universe expanded and cooled, the Universe dropped into the trough of the Higgs potential as shown. This had the effect of giving inertia to all of the matter in the Universe but in particular it gave mass to the particles that carry the weak nuclear force (the W and Z bosons)... What we are describing here is our current theory. Using this potential, this theory predicted the existence of a massive scalar (spin zero) boson which we called the ‘Higgs boson’ and this was indeed discovered in 2012 at the Large Hadron Collider.

However, just finding the Higgs boson doesn’t actually tell us the shape shown above is in any way correct. All we actually know is that the potential is off-set from the origin, and right at the bottom of the offset, the shape of the Higgs potential is parabolic. So actually, we don’t know very much about the Higgs potential at all – and thus, not very much about how particles acquire mass, or even if the minimum that we currently are in is the ONLY minimum. Perhaps, as illustrated below, we are only in a local minimum and there are additional minima that would be more stable should the Universe occupy them.

To learn more about the true shape of this potential we need to uncover more than one Higgs boson produced in a single collision of protons at the Large Hadron collider. We would need to find two, three, even four Higgs bosons flying out as a result of the collisions and measure the rates they are produced. Producing these sets of multiple Higgs bosons is predicted to be a very rare process, so groups of physicists on the ATLAS experiment are currently focused on detecting ‘just’ two Higgs bosons.

Looking for new states of matter

Physicists at Oxford are deeply involved in such searches in the ATLAS experiment and recently a team of physicists, including members from Oxford, have released new results of such a search. However, because we can predict, in the Standard Model, how often we can make Higgs bosons, the Oxford group has started this search by looking instead for new states of matter that might like to predominately decay into pairs of Higgs bosons. A diagram showing how this might happen is shown below. The two gluons within the colliding protons interact to ultimately produce the ‘X’ particle, which is the candidate we search for and that subsequently decays into a pair of Higgs bosons we can detect.

The Oxford group involved in this research are former Oxford students Dr Beojan Stanislaus (BNL) and Dr Santiago Parades (Brussels Univ) and current Oxford student James Grundy, Dr William Balunas (now the Walter Scott Fellow at Trinity Hall, Cambridge), and Professors Todd Huffman and Cigdem Issever (Visiting Professor at Oxford from Humboldt University, Berlin).  Because this search is seeking to find a real particle that then decays, the signature for it would appear as a bump in a plot of the mass of the pair of Higgs’s, and we call such bumps ‘resonances’. So this is the ‘resonant search’.  The search was conducted ‘blind’, meaning that the analysis team was not allowed to look at any data which could come close to the masses of pairs of individual Higgs bosons.

Since the Higgs boson decays very quickly, long before it can get to one of our detectors, we hunt for these pairs of Higgs particles through their decay to b hadrons. We do this because the Higgs boson decays into b-quarks 57% of the time, so the decay chain that would produce four b-hadrons is the one most likely to happen. Once we identify likely groups of particles that might contain a b-hadron, we require four such groupings and we form the total mass of the ‘thing’ that created the four b-quarks.

The plot below shows what the spectrum of data (dots) is compared to our simulated background (solid blue).  The horizontal axis is just the value of the mass of the 'X' that might have produced the two Higgs bosons (which is what m(HH) means), but more likely it is just a random combination of four jets with b hadrons in them. Examples of peaks that might have resulted if this new ‘X’ particle actually exists can also be seen. Sadly, the data are not consistent with the presence of a resonance (the ‘X’).  However, we CAN set a limit on how often X could be produced and still be invisible to our detectors. 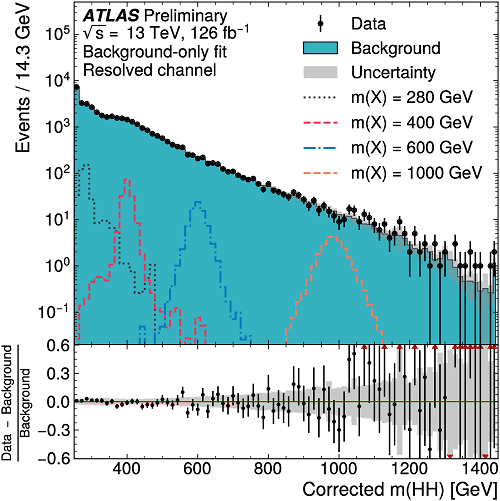 This last plot, below, is technically known as the ‘party piece’ and shows the 95% confidence level. This figure gives some idea of the limits that the ATLAS group can set. Basically, any rate that is above the lines has been ruled out by this measurement. 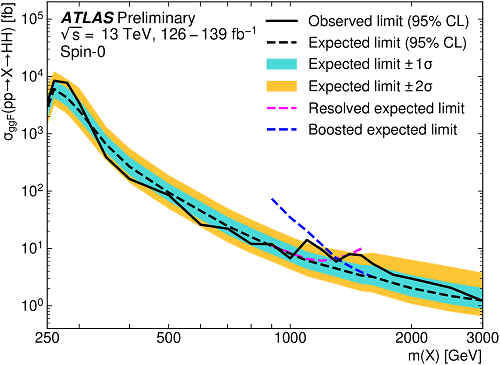 Meanwhile the ATLAS groups are all working to increase the sensitivity of analyses like this one so that, one day, we may actually detect the production of pairs of Higgs bosons for real. And we will start learning more about the Higgs potential and its true shape when that day finally comes.

Find out more about Oxford's work with ATLAS
Share this: