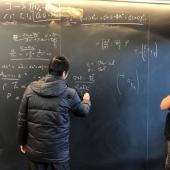 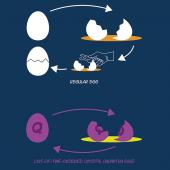 Problems that involve many interacting degrees of freedom arise in diverse branches of physics. These include both traditional subjects such as particle physics, critical phenomena, and condensed matter, but also newer fields such as polymer physics, biophysics, ultracold atomic gases, and the dynamics of quantum coherent devices. Theoretical approaches to these problems often reveal surprising and unexpected connections between phenomena that occur across widely varying length or time scales or in very distinct physical regimes.

Researchers in this theme are unified by a common approach characterised by ideas such as universality across systems, dualities between distinct theoretical descriptions, and the development of mathematical tools capable of both making  qualitative, 'big picture' predictions as well as computing experimentally measurable quantities with high precision.

Fields are physical quantities associated with each point in space and/or time and often furnish the most natural descriptions of many-particle systems. Quantum and classical field theories capture a wide variety of physical problems in apparently very different settings: for instance, they reveal an intimate link between the Meissner effect  (the expulsion of magnetic fields from the interior of a superconductor) and the Higgs mechanism in the Standard Model of particle physics. Predictions of these theories are relevant to experiments in a variety of areas, including biophysics, quantum materials, and particle physics.

String theory grew out of attempts to resolve the tension between quantum mechanics and general relativity. While many researchers continue to explore string theory as a way to unify the laws of physics, many others use it as a tool to explore deep connections between different field theories, which can allow progress to be made on otherwise-intractable problems.

Quantum dynamics explores how strongly-interacting quantum degrees of freedom evolve when disturbed from thermal equilibrium. While seemingly focusing on a distinct set of problems, this field is surprisingly linked to questions in quantum gravity such as the information-scrambling power of black holes, often through ideas in quantum information used to efficiently simulate many-body systems. It exploits physical principles such as hydrodynamics, mathematical techniques such as integrability, and diagrammatic approaches similar to those used in field theory. It also frequently makes direct connections to experiments, for instance those performed in the ultracold quantum matter and macroscopic quantum matter groups at Oxford.