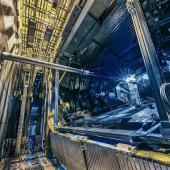 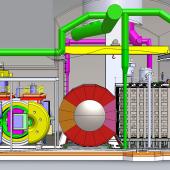 A tale of two detectors

Our world-leading research in experimental particle physics explores the most fundamental constituents of our Universe to understand their makeup and the forces acting between them; our work is underpinned by our novel instrumentation techniques and by the John Adams Institute, an academic centre of excellence for accelerator science and technology.

We use accelerator, non-accelerator-based experiments and quantum technologies and develop instrumentation and novel acceleration techniques to enable our science. Our research groups work:

Our research programme at the high-energy frontier focuses on the ATLAS experiment at CERN LHC. In ATLAS, we lead physics analyses on searches for new physics beyond the Standard Model, to understand the Higgs boson and Standard Model precision measurements. Thanks to our groups’ world-leading expertise and specialist technical services, we play a key role in the experiment’s infrastructure from the ITk pixel and strip detector to preparing form the a next-generation electron-positron Higgs factory.

Experiments at the intensity frontier require very high-intensity beams and advanced instrumentation to search for new physics through virtual particles enhancing rare processes via quantum loops. Our research includes LHCb at CERN to study heavy flavour quarks; Beijing Spectrometer III (BES III) studying quantum-correlated D mesons decays to improve our measurements at the LHCb; and MU3e at the Paul Scherrer Institute building an ultra-low mass tracking system to search for a muon’s ultra-rare decay into two electrons and a positron.

Neutrinos, the Universe’s most abundant particles, remain mysterious and understanding their properties is critical to our understanding of the origin of matter and the early evolution of the Universe. Oxford has a long history in neutrino physics dating back many decades, and has played a significant part in the great progress which has been made in the field through our critical contributions to the SNO (2015 Nobel Prize in Physics) and T2K (2016 Breakthrough Prize in Physics) experiments.

Our work in neutrino physics includes:

Oxford is playing a leading role in developing the next generation long baseline experiments: Hyper-K in Japan and DUNE in the US.

Most of the gravitating matter in the Universe does not emit detectable radiation. Recent research has focused on discovering dark matter (DM), which forms a window on new physics. In addition to invisible DM, most of the Universe’s energy is also invisible. This dark energy (DE) has been one of the foci of modern cosmology over the last 15 years.

Technologies such as quantum sensors have the potential to radically change our approach to understanding the Universe. With the AION project, we are building the first large-scale atom interferometer in the UK to search for light dark matter particles and we are also part of MAGIS-100, which will construct a 100 m tall device at Fermilab in the US.

Oxford has a long and proud history in instrumentation and our world-class facilities include the Oxford Physics Microstructure Detector facility (OPMD) equipped with state-of-the-art instrumentation to evaluate sensors in the laboratory before and after irradiation and build detector assemblies and Thermo-Mechanical Characterization (CTMC), a semi-clean, high bay, assembly and test lab. Our specialist researchers and technicians work with leading research facilities around the world and we play a particularly significant role at CERN.

The John Adams Institute for Accelerator Science sits within the Department of Physics at Oxford and is a centre of excellence in the UK for advanced and novel accelerator technology. The institute provides expertise, research, development and training in accelerator techniques, and promotes advanced accelerator applications in science and society.

A DPhil (PhD) in Particle Physics covers a wide range of topics from the study of new particles produced at high energy accelerators to neutrinos, dark matter and dark energy in the Universe and experiments are carried out at facilities around the world.