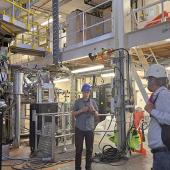 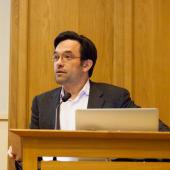 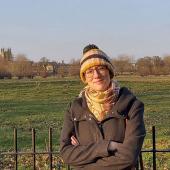 Theoretical physics is concerned with building a framework for addressing a variety of different questions across the spectrum of modern physics, and formulating the answers in a common language that enables the fluid interchange of ideas between disciplines.

Our research aims to develop qualitative pictures and quantitative tools to understand a range of phenomena. Although members of the Rudolf Peierls Centre work on topics that span many branches of physics  — from how bacteria swim to the inflationary origin of the Universe, from quantum matter to the chemodynamical evolution of galaxies —  we share a common culture and often deploy similar scientific tools. Much of the Centre's work involves quantum field theory, statistical mechanics, or perturbation theory, and we make extensive use of computer simulations. We are very much concerned with modelling experimental data and asking questions such as "what do these data tell us about the structure and dynamics of the system?" and "what are the experimental implications of this theoretical framework?"

Our work can be divided into three broad areas, each of which forms the basis of a research group: condensed matter theory, particle theory, and theoretical astrophysics and plasma physics. While each of these groups hosts a lively visitor programme and associated seminar series, we also come together four times each term for a theoretical physics colloquium, that emphasises the common intellectual threads that link members of the Centre.

Engaging with the Centre

Three times a year, we host a Saturday Morning of Theoretical Physics. Open to all Oxford alumni, these events centre around three talks given by leading theoretical physicists. The talks are pitched at a second-year undergraduate level and aim to explain an area of current research to an audience familiar with physics. Alumni attending these events also have a chance to interact with each other, with the speakers, and with current members of the Rudolf Peierls Centre.

Administration Officer/ PA to the Head of Theoretical Physics

The Department of Physics is delighted to confirm the appointment of Professor Shivaji Sondhi to the University’s Wykeham Professorship of Physics, a Leverhulme International Professorship, and the Tencent Chair of Theoretical Physics.

Students working towards their DPhil in Theoretical Physics can choose from topics ranging from astrophysics and plasma physics to condensed matter theory to particle theory and we collaborate with experimentalists in other sub-departments and worldwide.