ATP is the energy source for most metabolic reactions in living 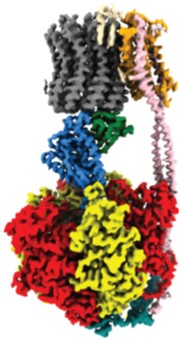 things, and most of it is made from a transmembrane protonmotive force by ATP-synthase.  This molecular machine consists of  two reversible rotary motors connected “back-to-back” by a common rotor, such that rotation of FO  driven by proton flux leads to ATP production in F1, while ATP hydrolysis in F1 drives the rotor in the opposite direction and leads to proton pumping in FO  ( in some organisms this reverse process is blocked by a specific "gear-stick" mechanism).

Much is now understood about the mechanism of F1, when it is isolated and rotating driven by ATP hydrolysis.  FO is much harder to study because it works only in an energized lipid bilayer.  Recent structures of the entire F1FO complex point to a mechanism where the energy from 3 or 4 small steps in FO (one per proton translocated) is stored in the elastic linkage between FO and F1, where it is used to synthesize a single  ATP molecules.

We are working out a way to measure the rotation of single F1FO moleucles during either hydrolysis or synthesis, in order to understand in detail how it really works.