The conduction reduction: why transporting heat around a galaxy cluster is harder than you think 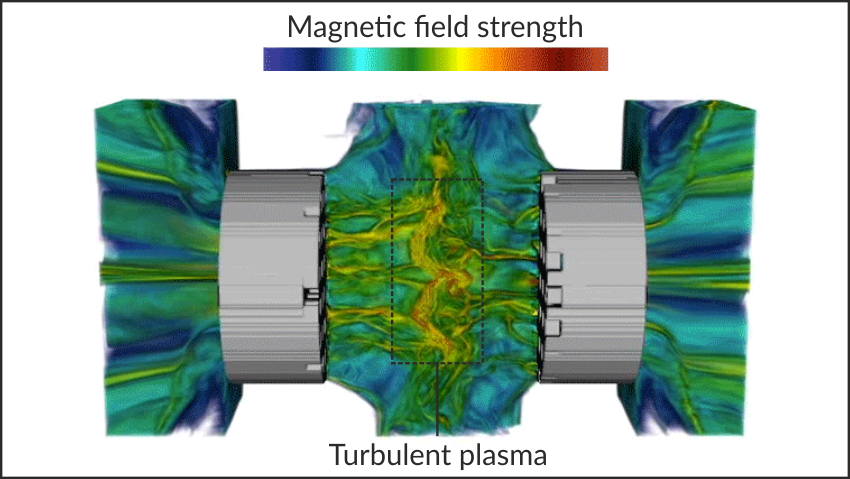 Galaxy clusters are among the largest physical structures in the universe. These vast aggregates of thousands of gravitationally bound galaxies are immersed in a tenuous, turbulent plasma so hot that it glows in the x-ray spectrum. While it is understood that thermal energy is pumped into galaxy clusters by violent emissions from active galactic nuclei, less is known about how this heat gets into the surrounding intergalactic plasma. In particular, it has been difficult to explain the anomalously high temperatures observed close to galactic cores.

To understand better the heat transport properties of these astrophysical plasmas, an international team comprising leading researchers from the Universities of Oxford, Rochester, and Chicago analysed a miniature galaxy-cluster-plasma replica created in an experiment at the National Ignition Facility (NIF). By vaporising closely spaced plastic foils with NIF’s intense optical lasers and allowing the resultant high-velocity plasma jets to collide with one another, the team were able to generate small pockets of heated turbulent plasma pervaded by tangled magnetic fields akin to that found permeating the intracluster medium. Much like their astrophysical counterparts, these laboratory plasmas radiated intense x-rays that, when filtered and collected, allowed the authors to reconstruct two-dimensional temperature maps showing how heat was distributed within the plasma.

Upon examination of these temperature maps, the team arrived at a surprising conclusion: temperature gradients in the plasma that should have been ironed out by thermal conduction over just a few picoseconds persisted over the entire nanosecond timescale of the experiment. In other words, heat remained ‘trapped’ in localised pockets of the plasma, unable to escape owing to a strong suppression of the plasma’s thermal conductivity. This was the first direct experimental observation of an effect that had long been hypothesised to take place in strongly magnetised plasmas:

“Electrons in the plasma collide sufficiently infrequently with each other that they end up following the tangled magnetic field lines”, said Dr Archie Bott, researcher at Princeton and alumnus of Oxford. “This phenomenon, which is precisely what is believed to occur in clusters of galaxies, gives rise to suppressed heat conduction.”

However, the sheer magnitude of the suppression was a surprise even to the team:

“This is indeed an astonishing result,” said Professor Petros Tzeferacos, director of the Flash Center for Computational Science. “To model the NIF experiments, we brought to bear the full array of physics capabilities of FLASH, the multi-physics simulation code we developed. The FLASH simulations were key for untangling the physics at play in the turbulent, magnetized plasma, but the level of thermal transport suppression was beyond what we expected.”

Experiments such as these demonstrate the huge potential of laboratory astrophysics to bring plasmas found only in the far reaches of the universe within our grasp.

“The experiments conducted at the NIF are literally out of this world”, concludes lead scientist Dr Jena Meinecke, Junior Research Fellow at Christ Church, Oxford. “Capable of bringing the powerful dynamics of the universe to the laboratory, the NIF truly provides opportunities to step into the unknown.”