Slip-slip competition: plasticity causes rotation,
except when it doesn't 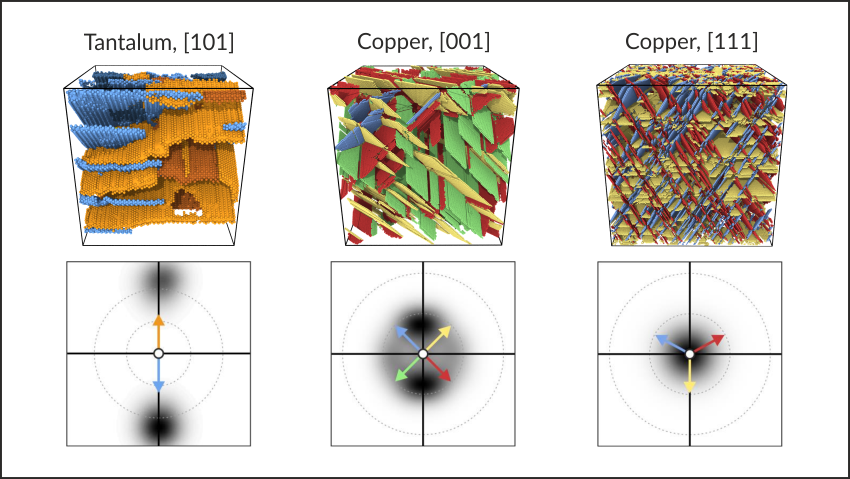 It has been known for a century that when metal is forced to deform plastically, its underlying crystal structure must rotate in order to satisfy the boundary conditions imposed by the loading geometry. The direction and degree of rotation encode the particular combination of plasticity mechanisms activated by the applied load. By measuring this rotation using electron backscatter diffraction (EBSD) or x-ray diffraction (XRD) techniques, materials scientists have been able to directly measure plasticity mechanism activities under quasistatic loading conditions.

The same phenomenon can now be exploited to identify the slip systems operative in specimens compressed to megabar pressures at extreme strain rates, thanks to ultrabright x-ray sources like EuXFEL and LCLS. Analysis of the diffraction patterns generated by dynamically compressed matter allows us to measure in situ the rotation of its crystal structure within a subnanosecond window, and thus to identify the slip planes on which plastic deformation is unfolding.

However, the absence of rotation can be just as telling as its presence. In a recent study, Patrick (Paddy) Heighway and Justin Wark revisited three dynamic-compression experiments on tantalum and copper led by Wehrenberg, Suggit, and Milathianaki, and compared the plastic response implied by their samples’ diffraction patterns with that predicted by large-scale classical molecular dynamics simulations. While tantalum compressed along [011] and copper compressed along [001] showed marked rotation, copper loaded along [111] remained resolutely aligned with the compression direction.

‘The amount of rotation depends critically on the contrast between competing plasticity mechanisms,’ Paddy explains. ‘In the first two cases, a subset of the slip systems vying for dominance wins, breaking the crystal’s symmetry and allowing it to rotate. In the third case, there is no winning plasticity mechanism; all slip systems are equally active, so the crystal cannot decide which way to turn.’

‘The fact that plasticity is distributed evenly among the slip systems active in copper dynamically compressed along [111] can in principle teach us something fundamental about the way dislocations – the defects that mediate plastic deformation – interact with one another during extreme deformation.’

The authors were also able to use their model of plasticity-induced rotation to quantify the degree of competition between slip systems in copper shocked along [001].

‘In their original study, Suggit et al. showed that copper undergoes duplex slip, in which a single pair of slip systems leads the charge. We can now show that this duplex slip is "impure", in that there is a non-negligble amount of activity on the systems previously thought to be dormant.’

The authors plan to extend their analysis to other model metals whose plastic response under dynamic compression is poorly understood, particularly those belonging to the family of hexagonal-close-packed crystal structures.