ALP Seminar: Generation, Detection and Application of Twisted Waves of Light and Neutrons 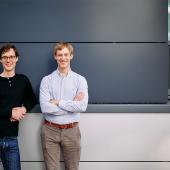 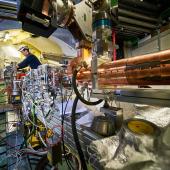 Oxford to play key role in pioneering experiment at CERN

Research groups in the Atomic and Laser Physics (ALP) sub-department undertake an extraordinarily broad spectrum of research which ranges from manipulation of individual atoms or photons to generation of the highest energy densities achieved on the planet. Our work encompasses pure research – for example studies of many-body quantum physics or understanding matter under extreme conditions – and the development of applications, such as plasma accelerators, fusion power, and quantum computing. The common thread to our work is the use of light to control and diagnose physical systems.

Our work in quantum science spans fundamental research aimed at furthering our understanding of quantum mechanics to the development of quantum computers.

Quantum information and computation
We use quantum-mechanical systems to store and manipulate information at the quantum level. Our research includes both seeking fundamental insights, as well as exploiting these phenomena to build quantum computers, which can solve certain sets of problems substantially faster than classical computers.

Quantum optics and ultracold matter
We use precision control of atoms and light to explore and exploit the quantum realm. Our research includes many-body quantum physics with ultracold atoms, atom interferometers for gravitational wave detection, and cavity-QED for enhanced light-matter coupling.

The field is expanding rapidly, largely driven by a new generation of high-power laser and X-ray free-electron lasers (XFELs). These include the Extreme Light Infrastructure (ELI), at three sites in Europe; the new Extreme Photonics Application Centre, based at Harwell, just 19 miles from Oxford; the European XFEL in Hamburg; and the Omega laser, the National Ignition Facility, and the LCLS XFEL – all based in the USA. The Oxford HED group works in close collaboration with all of these facilities.

Plasma accelerators
The electric fields developed within the plasma waves excited by intense laser pulses, or particle beams, as they propagate through a low density plasma can be 1,000 times greater than those used in conventional accelerators. Hence plasma accelerators could provide very compact sources of energetic particles and radiation, with applications throughout the biological, physical and medical sciences.

Laboratory astrophysics
High-power lasers can now create plasmas with properties relevant to many astrophysical phenomena, including supernovae explosions, white dwarfs and interior of stars and planets, and the turbulent plasma in galaxy clusters. Lab-scale experiments can provide new insights into the mechanisms underlying these phenomena.

High-density physics and inertial fusion energy
Laser pulses with energies in the kJ to MJ range can compress matter to densities as high as those found in planetary cores, enabling fundamental studies of matter under previously inaccessible conditions – especially when combined with XFEL radiation. We employ advanced quantum simulations and artificial intelligence to compare models and experiment. High-energy laser pulses are also used to study the conditions relevant for future sources of fusion energy

High-field science
The threshold for relativistic laser-plasma physics occurs at laser intensities of order 1018 Wcm-2, when electrons quivering in the laser field have relativistic energies. At still higher intensities a plethora of new phenomena are predicted to arise: for example, the creation of electron-positron plasmas and break-down of the vacuum in the frame of a relativistic electron beam, non-perturbative QED effects, as well as probing physics beyond the standard model

Head of Atomic and Laser Physics

Induction Information for newcomers to ALP

A DPhil (PhD) in Atomic and Laser Physics involves some of the most rapidly developing areas of physics ranging from the fundamental physics of quantum systems to high energy density plasmas and other interdisciplinary applications of lasers.